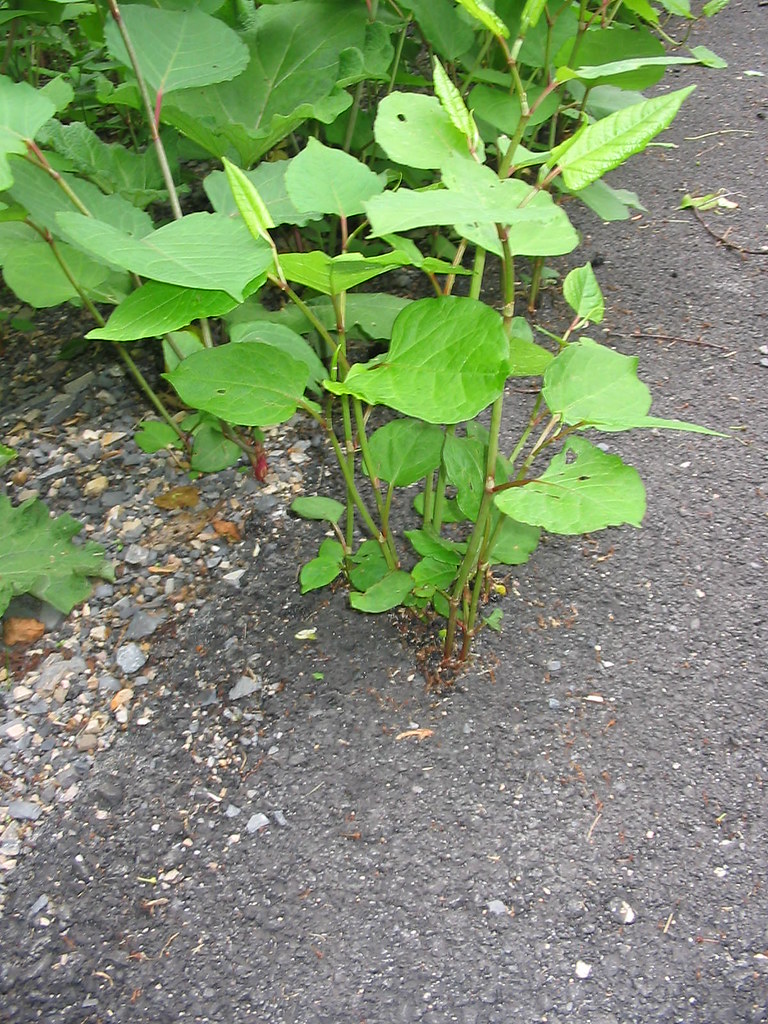 Japanese knotweed, also known as the “Godzilla” weed, is an invasive plant—and indeed, quite a challenging one to deal with as a property owner. It can commonly be seen apparently growing straight out of concrete surfaces! But can it grow through concrete?

While Japanese knotweed cannot grow directly through concrete, it can give the appearance of doing so by taking advantage of pre-existing cracks in the concrete.

Below, we’ll discuss what knotweed is, why people think it can grow through concrete, and other valuable information about dealing with it.

Japanese Knotweed: What Is It?

This fast-growing invasive species is a member of the Polygonaceae family, also known as buckwheat.

The plant has been around in the United States since the late 1800s but, due to its invasive nature, has run rampant since then.

It is, however, not entirely without its uses. It is an erosion control plant that can help protect certain areas from environmental wear and tear.

Japanese knotweed stands upright, growing anywhere from 10–15 feet tall. It looks like a cross between a shrub and a small tree.

Why do people think knotweed grows through concrete?

Japanese knotweed grows by taking advantage of small cracks, making it look as if the plant has penetrated concrete or brick set paving. But remember, it can only actually do this by exploiting existing cracks. While it is a powerful weed, it is not quite that powerful.

The weed also grows quite rapidly. Once it has found purchase, will expand at a startling rate. This can sometimes also give the appearance that it has grown through nearby structures—but again, only by exploiting existing structural weaknesses.

Knotweed is often dangerous. It typically exacerbates the cracks and structural weaknesses that it exploits for its growth, turning small problems on your property into much bigger ones.

It also grows exceptionally quickly, and often engulfs and destroys other vegetation native to your area.

It can leap as far as 3–7 inches in growth in one single day, and can end up spreading up to 23 feet in every direction. The roots themselves can grow as deep as 9–10 feet.

Where does it grow?

As the name entails, Japanese knotweed originated in Japan. The plant’s function as an erosion control led people in many other countries to import it and grow it intentionally. Many also enjoyed its ornamental value.

The plant has a wide range of survivable climates, which is both a problem and an advantage. Very few of its importers had any trouble growing it in their native climates.

But that survivability, combined with its extremely rapid growth, created an invasive species that has posed a challenge to property owners for decades.

Some of the best strategies to get rid of knotweed include smothering it with a tarp and using a herbicide to kill it. It is advisable to supplement either strategy with cutting back the growth so it doesn’t find purchase on your property. For more tips on how to deal with it, check out the video below.

See also  Porch Light Colors - What Do They Mean?