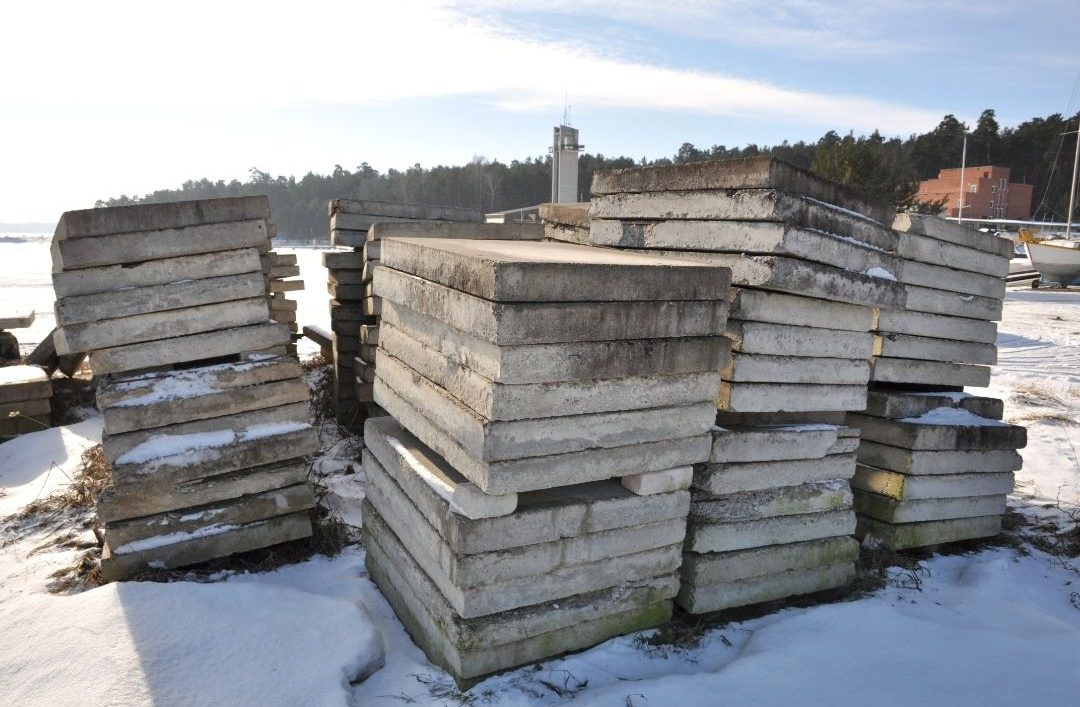 The actual weight of any given cubic yard of concrete can vary depending on how much water is within the mixture and the ratios of ingredients used in the mixture.

On average though, a slab of concrete will weigh 4,050 pounds (or two tons) per cubic yard.

Per cubic foot, a slab will usually weigh about 150 pounds.

But what contributes to a cubic yard of concrete’s weight?

The following article will explain all the factors that contribute to the weight of concrete, as well as the differences in weight between wet concrete and dry concrete.

The Weight of a Yard of Concrete

A cubic yard of concrete weighs, on average, 4,050 pounds. But this can vary; weaker concrete will be lighter per yard, because it has more cement than stone.

Strong concrete, on the other hand, will be heavier per cubic yard, because it contains less cement than stone.

Water, which weighs roughly eight pounds per gallon, is also a factor. You’ll need between 20 to 25 gallons of water in order to produce a cubic yard of concrete.

Although it’s an important factor, the amount of water is very small compared to the overall weight of the concrete.

You can work out how many cubic yards of concrete are in your slab by multiplying the square footage of the slab by the depth.

With concrete that has been broken up and loaded into a dumpster, there’ll be a lot of space between the concrete chunks, so in this form it would weigh closer to 2,025 pounds (or one ton) per cubic yard.

It’s worth noting that, generally, concrete can’t be transported in containers bigger than 20 cubic yards. This is because there tends to be a legal limit on how much weight can be transported on the road.

If you need to dispose of a considerable amount of concrete, you should be looking at renting more than just a single dumpster. But, again- accurate calculations will help you out here. 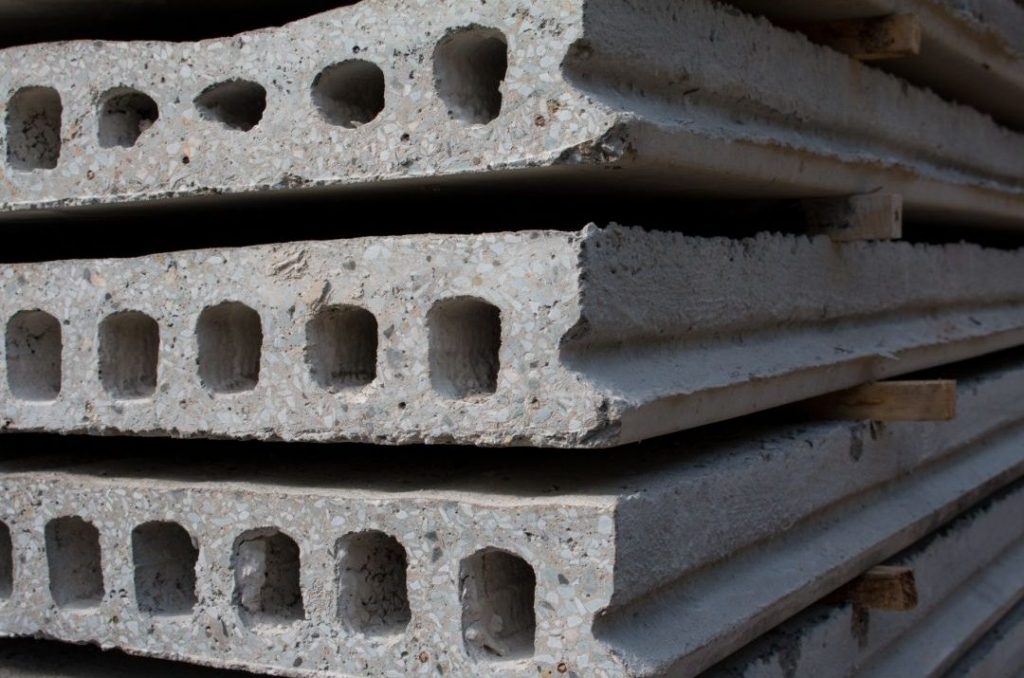 The factor that changes the weight of concrete as it goes from wet to dry is the amount of water in the mixture. When wet concrete hardens or dries, roughly half to two thirds of the water is used for the process of hydration.

Mixing a cubic yard of concrete tends to take between 20 to 25 gallons of water. 25 gallons is the limit; if you use any more water, you’re risking weakening the concrete.

One gallon of water weighs roughly 8.34 pounds, so the weight of the water used in a yard of concrete will weigh between 166.8 pounds to 208.5 pounds per cubic yard.

Frequently Asked Questions Regarding the Weight of Concrete

Concrete changes in volume once it has drained out. This change tends to amount to roughly 1/16 of an inch every 10 feet of concrete.

See also  Is It Cheaper To Pour Your Own Concrete?

Some cracking is usually inevitable. Contractors do implement joints into pavements and floors that are made of concrete in order for the concrete to crack in a straight, neat line when the substance’s volume starts to change.

You can prevent cracks in your concrete using a number of methods. The first is by starting with a sound, compacted subgrade. Another method is to modify your concrete mix so there’s a lower ratio of water to cement.

You can also install joints in the cement, in order to control where the cracks will form. The final method you should try in order to prevent cracks is to properly cure the concrete.

What Kind of Cracks Can Be Found in Concrete?

There is more than one way by which concrete will become cracked. The first kind of common cracks are called crazing cracks, which is essentially the development of fine fissures on the concrete’s surface that is caused by shrinkage on the surface layer.

The cracks don’t tend to be much bigger than three millimeters deep. They’ll be more noticeable on steel troweled or over floated surfaces.

Crazing cracks can be prevented by curing the concrete immediately, or by dampening the base before you pour the concrete. This latter method will force the water up to the concrete’s surface.

The other main kind of cracks are shrinkage cracks. These are cracks that appear due to changes in the concrete’s moisture content.

Because concrete is porous in structure, it expands when it absorbs water and shrinks when the water evaporates. 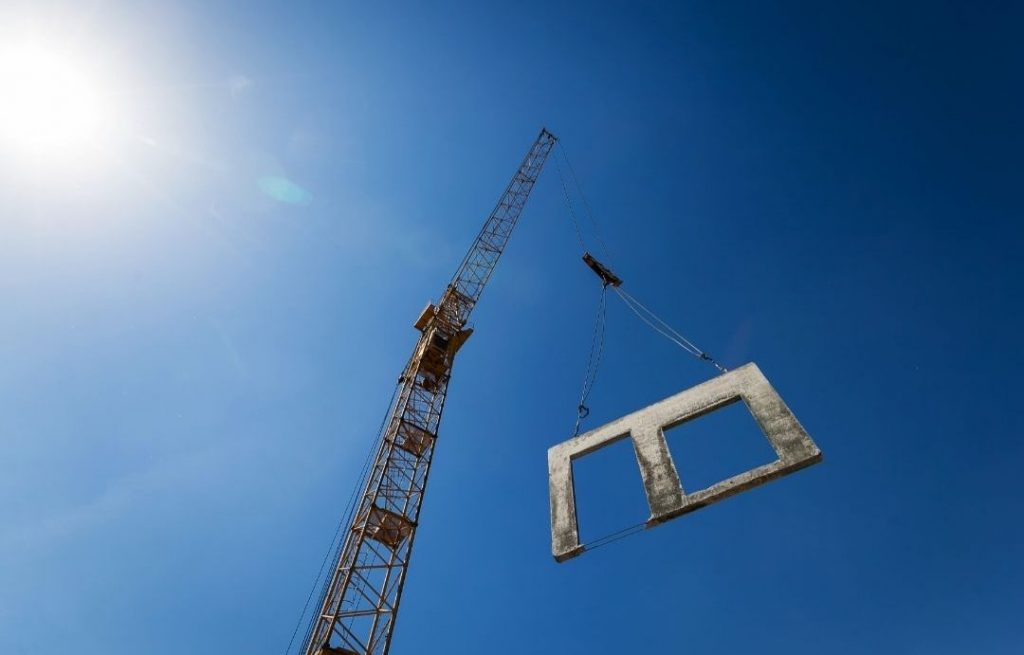 How do you Measure the Strength of Concrete?

When you’re working with concrete, you need to be thinking about more than just its aesthetic and its weight. Its strength is an essential aspect too.

The most common way to measure the strength of concrete is to use field-cured cylinders.

Once the concrete has been collected in the cylinders, they are cast, cured, and sent to a laboratory where the strength of the substance will be tested.

Because the testing is done by a third party, this is considered to be the most effective method when it comes to testing the strength of concrete, because there will be no one to interfere with the results.

How Much Concrete Should You Use?

Measuring how much concrete you need for a project requires the following steps. First, decide how thick you need your concrete slab to be.

Then, determine the width and the length of the area in which you want to pour the concrete, before also determining the square footage of this site.

Convert this thickness into feet, and then multiply the thickness by the square footage. This will give you the amount of concrete per cubic foot you’re going to need.

Conclusion: What Does a Yard of Concrete Weigh?

A solid slab of concrete tends to weigh around 4,050 pounds, or two tons, per cubic yard. This weight can vary, though, depending on whether the concrete mixture has more stone than cement, or more cement than stone.

The weight of a slab of concrete depends on a number of factors, namely the volume (which can be calculated by multiplying the length by the width by the depth), and the water content.

If you’re unsure about anything in the process of working with concrete, be sure to consult a professional contractor.

When you’re ordering your desired concrete, the concrete company you settle on will assist you with the right finish, colors, and texture for your project.